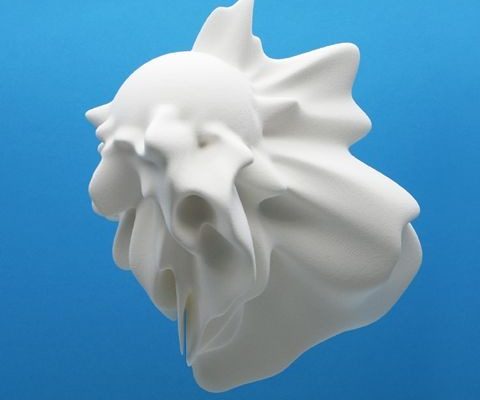 This research project will investigate what constitutes a print today for visual artists. Has digital technology diluted the medium so much that print is becoming a redundant term in creative practice?

Within creative arts practice, print processes have historically transferred from industry to the creative arts, for example lithography, screenprint and now digital print. The introduction of digital as a highly mutable and ubiquitous technology has expanded the possibilities of print whist evolving and redefining fine art print practices. The rapid advancement of digital is making it harder to define what a ‘print’ actually is; for example, rapid prototyping (3D printing) is an industrial process that can be used to create three-dimensional printed artefacts in a growing number of synthetic and organic materials. From a creative perspective this project proposes to explore this nascent field, as a context to revisit the printed artefact within a wider framework. From a fine art print perspective the investigation will address how new technologies are blurring the boundaries between disciplines whilst extending the definition and possibilities of the printed artefact and the graphic image.

ABSTRACT: The Printed Reality Exhibition presented photographic works by seven different artists within a gallery setting. The exhibition was conceived as a way to begin addressing the era of Photography 2.0 by considering the image and exhibition in the electronic age. Within the context of a print exhibition and as part of the physical-virtual gallery merger The Printed Reality exhibition dispensed with conventional and established printmaking exhibition formats. There were no artists’ prints or any traditional hanging and framing methods in the show; all images were digitally projected across a ‘site’ specific structure situated in the gallery. The artists were invited through an online image based community called flickr, where the participant’s work commented upon print as image but with little or no concern for surface tactility, process or materiality. The overlapping of the electronic image and printed presentation in The Printed Reality show was developed as a way to begin thinking about the (physical and virtual) transitions that are affecting museums, galleries and education – toward the production and presentation of digitally mediated artifacts.

Construction: The structure in the exhibition was built as a sight specific instillation; in this instance the specificity of the structure referred to a three metre squared section of wall in the gallery space. Prior to the exhibition a series of photographs were taken of the gallery wall and printed on photographic paper using a wide format inkjet printer. The prints were mounted and draped onto rectangular card panels supported by the photographic paper packaging.

The images exhibited in the Printed Reality show were selected from an online image hosting website called flickr. The site functions as an online community where users are able to view and share photographic images within a virtual gallery setting.

The Printed Reality group within flickr presents photographs of photographically recorded prints using the broad themes of Portrait, Landscape and Still Life. The recorded print captured within the photograph presents both image and object as appearance – a marriage of realities that is presented in the Printed Reality Exhibition. Within each of the artists work the interplay between image and object is not a seamless transition but one of artifice, theatre. Here the photographic image functions as a backdrop, a stage prop positioned and presented in such a manner that we are readily accepting of its fictional role. It is in the recording of the prints relationship to the “real” that the theatrical emanates from within the picture frame. The “real” performance projects from edges and folds that cast both shadows and omit reflections from an external world, a reality not of our own but somewhat more representative of are own.

In keeping with many of the image construction methods from the flickr group the placement and angle of the structure was designed so that features of the real and photographic wall registered with one another. By erecting a three-dimensional form using two-dimensional descriptions the instillation forced viewers into specific vantage points dictated by the cameras monocular vision. Thus reiterating our image constructed perception of reality and a momentary perspective of the two spaces converging.

During the exhibition the Portrait themed images were projected across the structure for five seconds intervals using a continuous loop system. Each image became fragmented traversing one gallery wall onto another alluding to further image and object oscillations.

This curated exhibition was funded by a UWE early career research grant and builds upon work undertaken by Laidler into his PhD, ‘Collaborative Digital Wide Format Printing: Methods and Considerations for the Artist and Master Printer’ (2011). This research explores the impact of digital technology on the working process of a practice-led artist within the field of printmaking which has been traditionally centred within the hand and mechanical machine. The research hypothesis what constitutes print practice for visual artists today? The research investigated the mediation of the concept through a digital production process with artists. The 8 artists that were invited to produce a digital print edition formed the case studies that illustrated the process and contributed to the curatorial premise for the exhibition. The invitation process was based upon artist’s work that engaged with digital the digital age as a means to consider the influence of the digital technology upon making and contemporary craft orientated pursuits. The research created a methodological approach for digital print editioning for digital studios and researchers in the field. To achieve this Laidler closely documented the physical working process with each artist.