Organised by MAMDP student Gin Saunders: Before photocopiers took over copy-making, messier, cheaper simpler duplicators ruled the world. The Gestetner revolutionised the office making printing easy, cheap and widely accessible. Its simplicity, efficacy and economy quickly put it at the heart of the community where schools, churches, local clubs and organisations churned out endless reams of pamphlets, bulletins and newsletters.

But behind closed doors the Gestetner sat just as solidly at the epicentre of counter culture; it was the DIY tool for fanzine writers, beat poets, anarchists and agitators. Hovering in the hazy world between counter culture and the truly clandestine, it helped to foster freedom and express the shock of the new. More recently the Gestetner has enjoyed a renaissance as a vehicle for creative expression for artists and printmakers across the globe.

2021 marks the 140th anniversary of the Gestetner which was first patented in 1881 by David Gestetner. Gestetner devised the duplicator after working in the stock market in Vienna where his job involved endlessly, hand writing multiple copies of each day’s activities. He had previously been a kite seller, and it was the waxed Japanese kite paper that inspired his first duplicating device using a waxed stencil and stylo. David Gestetner eventually moved to England and in 1881 established the Gestetner Cyclograph company. The Gestetner works opened in 1906 at Tottenham Hale, north London, and employed tens of thousands of people right up until the 1990s.

The physical exhibition at UWE brings together work from two current Gestetner printmakers: Petra Schulze-Wollgast (psw) and Jim Pennington, alongside Gestetner rarities, equipment, memorabilia and ephemera. The exhibition is not open to the public at this point. For more information and to see the on-line pop-up gallery of prints and music inspired by the Gestetner, visit Gestetner 140. 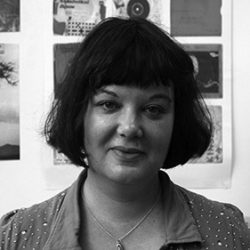