The artistic methods and style of 18th century Italian painter Giovanni Antonio Canal, commonly known as Canaletto, have been examined and uncovered by Research Fellow Dr Xavier Aure at the Centre for Fine Print Research using a prototype scanner capable of capturing minute details, textures and brush strokes that are invisible to the human eye.

Visit the scanner viewer tool to zoom in on the painting and compare it to the detailed scan.

Dr Xavier Aure was given the opportunity to trial his scanner on Canaletto’s ‘The Grand Canal, Ascension Day’ oil painting which is currently on display at the Holburne Museum in Bath as part of their ‘Canaletto: Painting Venice’ exhibition. It is the first time in more than 70 years that the paintings have left their home at Woburn Abbey – one of the world’s most important private art collections – giving members of the public the opportunity to see some of Canaletto’s best works up close.

3D scanners are often used by conservators and curators to document and evaluate the condition of paintings and understand artists’ techniques. Information gathered by the scanner can be used to visualise surface texture in ways not previously possible. While most scanners are very costly and capable of examining only small objects or paintings in detail, Dr Xavier Aure at the CFPR has created a cost-effective prototype scanner capable of capturing much larger works, including the Canaletto painting which measures 190cm by 120cm.

The painting was scanned over three days and more than 5,000 up-close images of the painting were captured to create the final scanned images which users can view and interact with online. The final high-resolution images provide a fascinating insight into Canaletto’s working method, particularly his process of incising and outlining the architectural elements of the painting. Meanwhile, shaded images rendered from the surface structure information clearly show the incision lines that were produced while the paint was still wet. These allowed the artist to emphasise architectural details.

The scanner records approximately 1m2 sections. Due to the large size of the painting six different sections were needed to record the whole surface. The capturing process is automated and generates hundreds of images with consistent overlaps. Two large sets of photographs are produced. One set contains images with diffuse even lighting used for a technique called photogrammetry which allows the extraction of quantitative 3D measurements. The other set contains several sub-sets of images with photographs under varying illumination angles used for a technique called photometric stereo which recovers the orientation of the surface at per–pixel level. The combination of the two techniques provides accurate detailed data to produce a variety of 2D and 3D outputs for documentation and visualisation purposes. 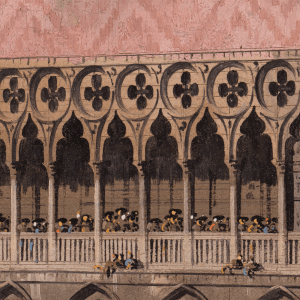 9cm section of the painting (Ducal Palace) in colour. ©From the Woburn Abbey Collection 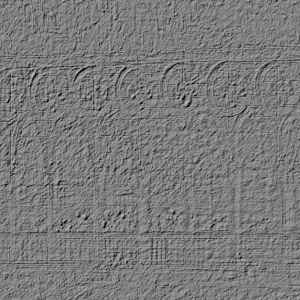 9cm section of the painting (Ducal Palace) as a shaded render to show the surface texture. ©From the Woburn Abbey Collection 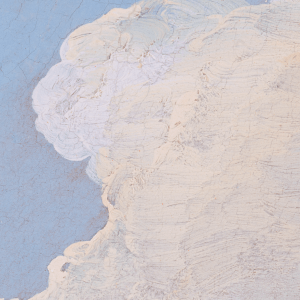 9cm section of the painting in colour. ©From the Woburn Abbey Collection 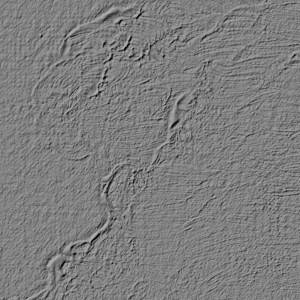 9cm section as a shaded render to show the surface texture. ©From the Woburn Abbey Collection 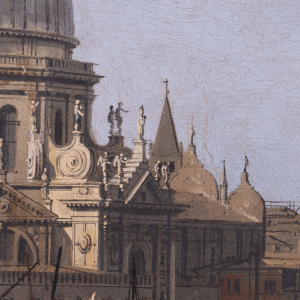 9cm section of the painting (Church of la Salute) in colour. ©From the Woburn Abbey Collection 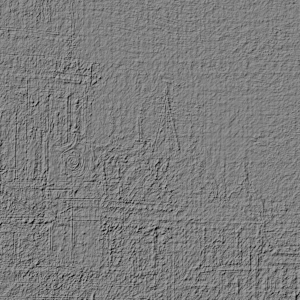 9cm section of the painting (Church of la Salute) as a shaded render to show the surface texture. ©From the Woburn Abbey Collection

Images ©From the Woburn Abbey Collection

Research Fellow, Dr Xavier Aure said: ‘‘It was a privilege to examine and capture one of Canaletto’s masterpieces. The images we have generated using the scanner reveal so much about his working style and process; we can extract information about the surface, see how the artist applied paint and learn more about the way he constructed his work. For members of the public, these high-resolution scans provide an opportunity to engage with Canaletto’s painting remotely which has become so important during the pandemic when travel is restricted.’’

The development of the scanner is a collaboration between Dr Xavier Aure and Thomas Bale at the CFPR and Vāsthu, a technology company working at the intersection of arts and robotics.

Back to Print and Imaging: Reappraising the Past 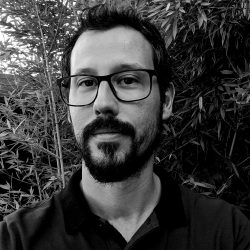 More Print and Imaging: Reappraising the Past Projects