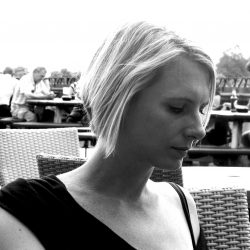 Verity is a PhD candidate within the 3D3 programme funded by the National Productivity Investment Fund. Although artists and designers have adopted digital photographic rendering techniques, there has been no fundamental questioning of the underpinning theory behind the process. Four colour separation (halftoning) techniques invented in the early 20th Century have been completely adopted from both the commercial and computational expediency. The timing is now right for a radical re-appraisal of physical rendering techniques for printing. Verity will investigate methods of driving a 6 axis robot including Cartesian XYZ platforms and Delta robots to create an interface which transcribes a coloured image created through pixel and non-pixel based software through firmware drivers to create a reproducible coherent image. This project will be empirically based using iterative methodological approaches.

Verity’s PhD is supported by the AHRC.