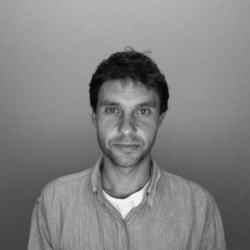 Paul has worked both in and with the CFPR since 2003, contributing to research activities as a senior researcher, academic lead partner, project manager, supervisor, co-author, curator and artist. Initially, Paul assisted on the AHRC project Methodologies for the integration of fine art practice and wide format digital printing (2003-2007) that would later establish his primary research activity in collaborative digital print studio production at the centre. The role of researcher facilitator led him to the formation of his PhD study Collaborative digital and wide format printing: Methods and considerations for the artist and master printer (2011) and his ongoing practice based relationship with digitally mediated artefacts. In 2011-12 Paul founded CFPR Editions (a fine art print publishing studio within the University) as part of a UWE funded early career research grant that investigated the expanding field of production for the digital printed artefact in a visual arts context. The Fine Art publishing practices association with innovation, enterprise and external engagement led to two REACT (Research & Enterprise in Arts & Creative Technology) funded projects between 2013-15. The projects explored the integration of mobile app technologies with printed artefacts and included a creative economy partner alongside Paul’s role as the Academic Lead Partner from the CFPR.

In addition to research project activity Paul has contributed to the CFPR in a supervisory capacity. Between 2010-12 he supervised on an award winning knowledge transfer partnership and has been part of two CFPR PhD supervisory team completions in 2018 and 2019. He is currently supervising one of the centres PhD candidates within the 3D3 programme (funded by AHRC) and is a senior lecturer on the MA Multidisciplinary Print and BA  Illustration programs at UWE. In conjunction with his educational role Paul is the external examiner for the BA Fine Art in Contemporary Print Practice at the Limerick School of Art and Design, Ireland and holds fellowship status within the Higher Education Academy.

Finally… Paul’s artworks have also been recognised both nationally and internationally through a series of juried exhibitions and included in collections at The V & A, Tate Britain, Royal West of England Academy, School of the Art Institute Chicago, National Gallery of Australia Canberra and The Print Centre Philadelphia. He has undertaken artist residencies at The University of Texas at Austin, Department of Art & Art History, USA, 2018; The Eugeniusz Geppert Academy of Art and Design, Wroclaw, 2014 and Griffith University, Queensland College of Art, Brisbane, Australia, 2011 and continually publishes his research activity through journals and conference papers.

Congratulations to Sarah Bodman, Ian Chamberlain and Paul Laidler who have been awarded the Best Overall Performance in the Postgraduate…