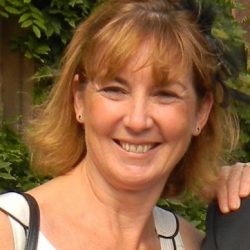 Professor Helen Gleeson OBE is the Cavendish Professor of Physics and Head of the School of Physics and Astronomy at the University of Leeds. She has more than 35 years of experience of experimental studies of liquid crystals, from a fundamental, deep understanding of their physical properties to new device inventions and discoveries.   Helen graduated from the University of Manchester in 1983 with a 1st class degree in Mathematics and Physics, a PhD in experimental physics in 1986 and rapidly progressed as an academic, becoming the youngest professor of physics in decades at Manchester in 2003.

She has pioneered many experimental techniques for the study of liquid crystals and devices, developing a deep understanding of their physical properties relevant to uses. She has invented devices including smart, switchable focus contact lenses, novel sensors and, most recently the first molecular auxetic material.

Helen has supervised more than 33 postgraduate students, collaborating with industrial partners including Merck, Bell Labs, Syngenta, Qinetiq, Qioptiq, DSTL. She co-edited the most comprehensive textbook for liquid crystals (Handbook of Liquid Crystals, an 8 Volume Set, Wiley VCH Germany, 2014.), has published more than 180 papers in leading journals and given hundreds of conferences presentations.  Her research achievements have been recognised by national and international awards by learned societies; the Hilsum and George Gray Medals of the British Liquid Crystal Society; the Holweck Prize, the Institute of Physics and French Physical Society Bilateral award, and the Rank Prize Lecture in 2016. Helen is very active in outreach and in issues around equality and inclusion. She was awarded an OBE in the Queen’s Birthday Honours 2009 that acknowledged her work on equality and inclusion in physics in addition to her scientific achievements. She won the 2018 Times Higher Education Outstanding Research Supervisor of the Year award, reflecting both her approach to mentoring early career researchers and to improving the environment for minorities. 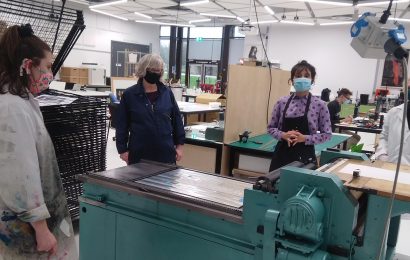 Professor Helen Gleeson visited the Centre for Print Research to see the labs, meet colleagues, and get some hands-on printing…

New members of the Woodbury and Lippmann team

The Woodbury and Lippmann team has three new members. Harrie Fuller and Elizabete Kozlovska have joined the EPSRC funded project:…