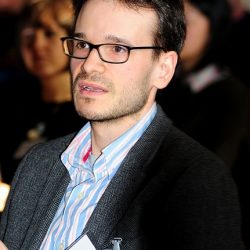 Geoffrey joined the CFPR as a visiting fellow in 2020. He is a curator and historian of science, photography and visual cultures of the 19th to 21st centuries. His research, curation and exhibition work is fundamentally interdisciplinary, focusing on the way that images and objects are made to contain meaning across different communications contexts. In particular, his research is focused on the role of different forms of photographic reproductions. He is working with CFPR in developing several projects around the recreation of prints in photographic collections.

He started his career working in an academic university setting, where he has managed a trans-Atlantic correspondence project and as a post-doctoral researcher on the AHRC Science in Culture large grant ‘Constructing Scientific Communities: Citizen Science in the 19th and 21st Centuries.’ (ConSciCom). Since joining the museum sector, he is leads research for the Science Museum Group and large scale gallery projects.

He is the reviewing editor for the Science Museum Group Journal, sits on the AHRC Collaborative Doctoral Awards Panel for the SMAC consortium, and oversees the grant development for the National Science and Media Museum curatorial team. He is also the lead supervisor on 3 AHRC CDA projects through the SMAC consortium.

As Head Curator of the National Science and Media Museum, Geoffrey manages the team of curators and archivists who collect, research and care for collections in photography, film, television and sound technologies. He has published widely in leading journals, edited volumes, and an academic monograph published with Bloomsbury Academic. He has also developed and implemented a citizen science project – www.sciencegossip.org – to work with the public to research the history of scientific illustrations in the 19th century.