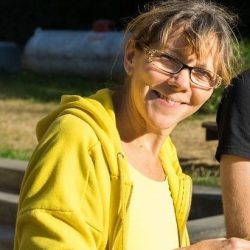 Dr Angela Thwaites was appointed as a Visiting Fellow at the Centre for Fine Print Research in 2021. Angela will contribute to the research culture of the CFPR as part of the ACE faculty. Angela is an artist, researcher, author and educator. Angela’s art practice explores mass, space, light and colour expressed through sculptural form in glass.  Exhibiting regularly in international museums and galleries, Angela’s artwork is represented in private and public collections across four continents.

From an initial art and design education in 3D design, ceramics and glass, Angela became specialised in kiln forming glass. Receiving British Council Post Graduate Scholarship funding for her MA, Angela lived in Prague in the 1980s where she studied at the Academy of Applied arts under Professor Stanislav Libensky focusing on monumental scale sculptural glass casting.

Returning to live and work the UK, Angela became involved in education and has held senior lecturer posts at Wolverhampton and De Montfort Universities as well as being an external examiner and visiting lecturer at a number of UK Higher Education Institutions. Angela has presented at conferences and symposia In Australia, USA and Europe and taught Masterclasses and Specialist workshops in USA, Europe and China.

Based at the Royal College of Art, London, between 1999-2001, Angela carried out a Research Project published in 2002 as ‘Mixing with the Best’. This led to Bloomsbury commissioning her first book ‘Mould Making for Glass’ launched in 2011 with an accompanying exhibition which Angela co-curated with London Glass Blowing Gallery.

Having worked intensively in academia for 30 years, in a broad range of contexts and countries, Angela was motivated to undertake a PhD and was awarded an AHRC Studentship 2014-18 at the University of Sunderland, National Glass Centre.  Angela’s PhD explored previously unmakeable forms and structures created through combining CAD/3D printing with the material presence of the handmade.