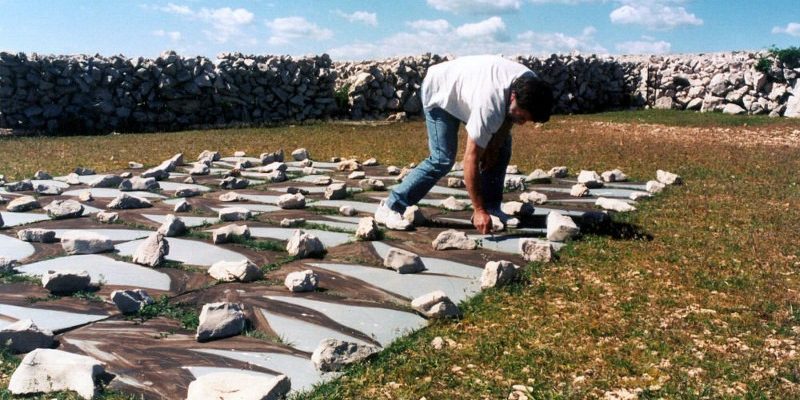 Katerina Kyselica is joining us for a fascinating look at change in the context of 20th century Central European printmaking.
(The image shown here of Josip Butkovic was taken by Ana Vivoda.)

Matrix. Where Things Happen. – A talk by Katerina Kyselica on 20th century Central European artists who have embraced the notion of change in printmaking.

When thinking of the 20th century Central and Eastern European print, an image of fantasy and imaginative artworks based in drawing typically emerges. It reveals stunning impressions of exquisitely crafted printing plates. The 1960s brought new art tendencies also to the East, behind the Iron Curtain. The risk-seeking artists took interest in events, actions, experiments and searching. Some began appreciating matrix – the basic component of all printmaking, the carrier of traces – as an ultimate space for testing artistic concepts and theories, and documenting the phases of change.

To expand on the preconceived image of the traditional Central European printmaking, Katerina Kyselica will present artists whose practice demonstrates fascination with the medium for its ability to remember the process of changes. Drawing from the archive of Celebrating Print Magazine, a publication on Central European print published from 2015 – 2018, Katerina will introduce remarkable stories of three artists: Czech Vladimir Boudnik (1924 – 1968), whose own program for a new, abstract art in the 1960s communist Czechoslovakia led the artist to develop alternative printmaking methods; Hungarian Dora Maurer (b. 1937) who has been exploring matrix as a shapeable, constantly changing object since the 1970s, creating action prints permeated with the duality of destruction and conservation; and Croatian Josip Butkovic (b. 1950) whose process capitalizes on the duality of fortuity in the art process and a strict respect for the characteristics inherent to the traditional studio practice of printmaking.

Katerina Kyselica is a visual artist, designer, curator and lecturer. She received a BFA from Virginia Commonwealth University School of the Arts, Virginia, US, and a Master’s Degree from Charles University in Prague, Czech Republic. Her prints and works on paper, represented in private collections, have been exhibited in solo and group shows in New York, Paris and the Czech Republic. She curated surveys of contemporary prints and artist’s books from Central and Eastern Europe— Celebrating Print Exhibition (2013–2015) and Forgetting Remembering (2019). Kyselica’s articles on art, printmaking and design have appeared in Czechdesign.cz, Design Magazin, MF DNES, Art+Antiques, Celebrating Print and the Journal of the Print World. She was a managing editor of the Celebrating Print Magazine (2015-2018).

Back to News
To top