Any open call show is as much a portrait of the jury as it is of the state of contemporary art, particularly in the world of printmaking, which occupies an awkward position halfway between the world of cutting-edge technology and the more domestic worlds of illustration and graphics. On the side of the jury, political events, personal taste, cultural conditioning and possibly market forces, undoubtedly influence decisions. Thus, selected artists have to conclude that they were invited in part due to a bit of luck and a bit of merit, tempered with the fact that work nowadays is selected online, without the sensed nuances of delicate inks and papers, and without being able to judge true colours and scale.

Having said all of this, I was very pleased to be included in the final shortlist of 25 artists out of 325 applications in this year’s version of the René Carcan prize. My prints come from a series that I’ve been working on for the past three years, called Diary of a Printmaker, which depict absurd narratives of life drawn from personal experience, and which now number over 100 prints. There are prints that make ironic comments on life with some degree of humour: such as scenarios of mobile phone addiction (people post-swim, dripping as they gaze at their screens), depictions of the seriousness of the love we have for our pets (the tenderness of an owner’s embrace on their little hamster or monstrous dog), and the sensation of being wrapped up in thought when drinking and drawing in a café somewhere in the world. The prints were all made for my father, who remains in a care home, after breaking his neck in an accident almost six years ago.

The selection was made by five judges: Rebekka Baumann, Geneviève Laplanche, Roger Dewint, Charlotte Massip and chaired by Virginie Caudron (an art historian who has been involved in the Museum of Drawing and Original Print in Gravelines, France, for the past 28 years). While the work on display was full of contrasts, I felt that there were some unifying themes: largely a strong focus on serious, well-executed imagery, with narratives of bodies in space and portraits of people and places: both real and imagined.  The tone was sombre –– 16 of the artists making work in largely black and white –– with themes of death, decay, shadows, ageing and introspection. Four of the works were abstract, layered, very printmaker-ly compositions, and the rest were linocuts and etchings in glorious technicolour.

The first prize was awarded to Malgorzata Chomicz, a Polish artist who lives in Italy, whose photorealistic linocuts of seed heads and twisted dead birds embody an enormous labour of time and talent. Second went to Fumio Yamaguchi, whose lithographs of dead winter trees also paid homage to the photographic. Third prize was to Henri Dupont, whose beautiful coloured etchings of an elderly naked woman, crotch splayed, knickers on view, were for me very problematic, and surprising considering the largely female jury.

If I’d been in the panel, I would have certainly awarded something to James Albon, whose bright reduction linocuts, beautifully observed, show complex narratives that satirize and entertain. I’d have also picked out Rika Deryckere, whose woodcuts of herself, an aging woman, twisting her face against a dark backdrop, demonstrate again a fluid, spare use of the medium, and the power of the female gaze.  Then I would undoubtedly award something to the jewel-like cityscapes by Mary Teichman whose depictions of light and shadow in Shanghai feel both nostalgic and Hopper-esque.

The eponymous René Carcan was a Belgian etcher and engraver who was internationally known and very interested in experimental prints. When he was in his sixties he decided to make a foundation “to develop the art of printmaking”. The prizes from this show are substantial and supportive, and this widely publicised exhibition goes a long way towards encouraging that goal. 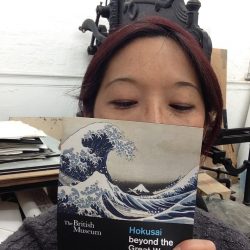